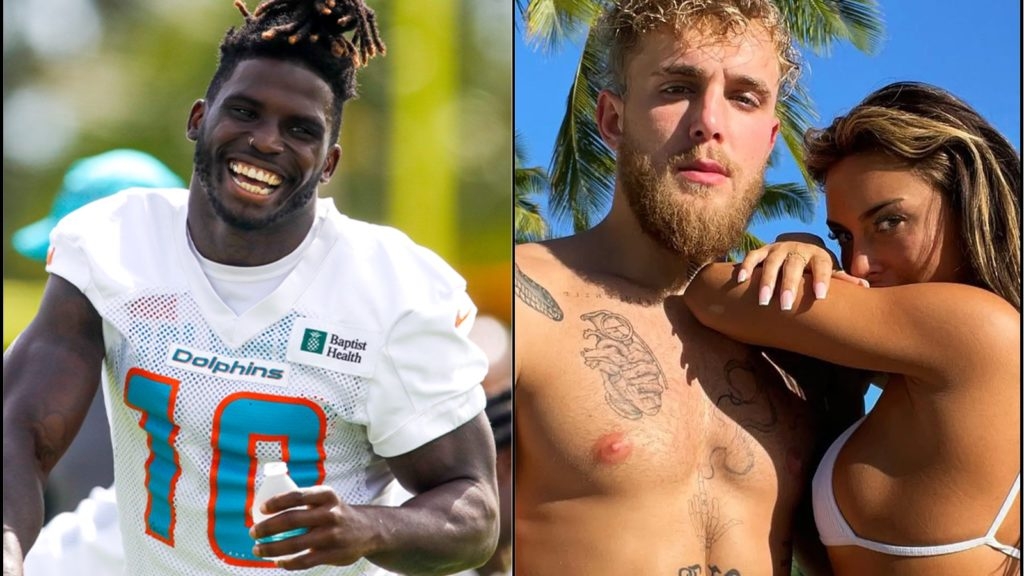 New Miami Dolphins wide receiver Tyreek Hill has had himself an adventurous offseason. In March he was traded to the Dolphins by the Chiefs in a blockbuster deal that shocked the NFL world. He then proceeded to take shots at his former quarterback Patrick Mahomes and the Chiefs organization, about how they threw him to side like trash. He even used the shots at Mahomes to try and uplift his new signal caller Tua Tagovailoa, even going as fas as calling Tua the most accurate quarterback in the NFL.

But Hill’s offseason antics haven’t stopped there. The speedy Hill, also known as “The Cheetah,” started his own podcast called, “It Needed To Be Said.” But in Hill’s case it’s usually the opposite as he doesn’t always know what to say. Hill has also made his share of appearances on other podcasts. Recently he appeared on YouTuber turned celebrity boxer Jake Paul’s podcast. On there he chimes on a bevy of useless topics, but refused to discuss Deshaun Watson’s situation when asked about it. Maybe Paul’s comments on Watson, where he said he didn’t believe Watson should be able to play. Maybe those comments spearheaded what Hill recently did.

Never one to care what others think Hill recently tweeted a video of himself jumping in Rose’s DMs. There he used his ever popular saying of ….

“Don’t forget about me.”

A little back and forth ensued between the two. With Paul basically saying, what are you to Reek. And of course Reek responds as if he’s ready to jump in the ring for a boxing match. Doubt the Dolphins would be okay with that at any point when they’re paying him $30 million per season over the next four seasons.

In August, Paul called out San Francisco 49ers star wideout Deebo Samuel for jumping into his GF’s DMs. Paul said NFL and NBA players are in everybody’s DMs and they have no game. Paul said they say “HEY,” and expect a girl to be excited because they see the blue verified check. But in his opinion that’s not how it works anymore.

Paul is dating a very attractive female who made her name on MTV and has now become an Instagram model. So he’ll probably have this problem as long as she’s on the social media phenomenon.

Who knows maybe it could land him some future celebrity boxing matches. Either way it seems as if he’ll be constantly calling guys out for hopping into his lady’s DMs.