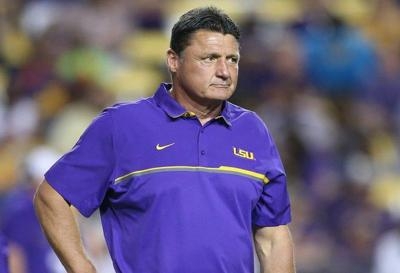 The LSU Tigers were the toast of the town in 2019. Led by Heisman Trophy winner and future No.1 overall pick Joe Burrow, the Tigers sat atop the college football world after beating the Clemson Tigers (42-25) to capture it’s first national championship since 2007. The  Tigers also ended their eight game losing streak to archrival Alabama. A win so momentous that it had then head coach Ed Orgeron yelling things like, f—coach you Roll Tide in the visitors locker room at Bryant-Denny Stadium. Orgeron even said they were bound to beat the Tide on the recruiting trail, amongst other things. But how quick things change in the world of college athletics.

Following the Tigers (15-0) title winning season, things didn’t go to well. A string of embarrassing losses and him allegedly ignoring a sexual assault claim didn’t look good. In October 2021, athletic director Scott Woodward pulled Orgeron in for a meeting where he let him know his fate. Which was he would no longer lead the Tigers at the end of the season. Orgeron took to Twitter to let his fate he known, and at season’s end he went off quietly into the sunset.

In his first comments since his departure from Baton Rouge Orgeron detailed how that meeting went.

Orgeron Chops It Up At Little Rock Touchdown Club:

Coach O spoke highly of the LSU leadership and how they handled things. In fact, the Bayou Bengals even paid him the remaining $17 million on his contract.

Orgeron then details how the meeting with Scott Woodward went.

“I had a meeting, Coach, things are not going well. No s—t, Ray Charles can see that, brother.”

“Scott Woodward is a friend of mine, and I have a lot of respect for the way they handled me.

“He said, ‘Coach, you’ve got $17.1 million on your contract. We’re going to give that to you. I said, ‘What time do you want me to leave, and what door do you want me out of brother?” Orgeron said with a chuckle.

Since that magical 2019 season the Tigers one of college football’s most successful and recognizable brands have gone a disappointing 11-13 including this season’s opening game loss to Florida State under new head coach Brian Kelly.

Tigers Did Have An Immense Amount Of Talent On Orgeron’s Title Winning Team:

The 2019 LSU Tigers put some stalwarts in the NFL, beginning with quarterback Joe Burrow who won the 2021 Comeback Player of the Year, and took the Cincinnati Bengals to the Super Bowl in just his second season. Wide receivers Ja’Marr Chase was named 2021 Offensive Rookie of the Year. His partner in crime Justin Jefferson has been named second-team All-Pro in both of his NFL seasons. Running back Clyde Edwards-Helaire is the starter in the Kansas City Chiefs juggernaut. Cornerback Derek Stingley was just chosen by the Houston Texans third overall. Linebacker Patrick Queen has become the unquestioned leader of the Baltimore Ravens defense.

So all in all not bad at all as many players from that team are starring in the NFL and Orgeron is still making folks laugh.

Not hard when someone gave you $17 million to leave the premises.