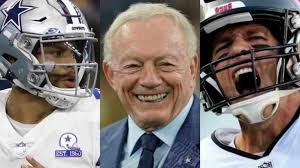 All offseason Dallas Cowboys owner and team president Jerry Jones has made some outlandish comments and gave some very odd takes. Some of those comments and takes feature him complaining about star quarterback Dak Prescott’s $40 million a year deal, having an adverse effect on the rest of the roster.

He’s also made some questionable moves, none being bigger than trading away top receiver Amari Cooper. Now with the season opener just one day away, Jones is at it again. This time he’s rehashing some comments he made in 2019 about his quarterback as it pertains to one Thomas Edward Brady. In an interview with 105.3 The Fan, Jones come again heaped praise on his signal caller, while comparing him to Brady. When asked if he hopes to see Brady’s unbelievable stretch of great play come to an end soon, Jones responded with “I hope so.” He then elaborated “There’s a lot of me that sees the excellence that Tom Brady is about, how much he focuses on the nuances of the game, I see those characteristics in Dak. And I see the improvement. We just want to be part of the story of Dak Prescott as he evolves. And if he can get to that success level, then that word elite is going to start showing up. But we’ve got to win some games here.”

Either Jones truly has a lot of belief in Prescott or he’s blowing smoke because he had no choice but to pay him. But for him to compare him to Tom Brady, the greatest to ever do it from the quarterback is complete overkill. While Dak has overachieved considering where he was drafted and his pre-draft NFL projections, he’s not even in the same stratosphere as Brady.

Back in 2019, during an appearance on the same exact radio station, when asked if Prescott was more like former Cowboys quarterbacks Troy Aikman or Tony Romo, Jones gave a surprising response.

“I think he’s more like Brady. We know Tom Brady and he’s not Tom Brady. But he’s evolving into a guy that will beat you. I think we got us one in Dak.”

Yes Dak has won his fair share of games as the Cowboys starter, going 53-32, but 25 of those wins have come against a pretty bad NFC East. His 1-3 playoff record also doesn’t bode well for Jones’ argument.

Brady on the other hand is 278-87, which includes 243-75 in the regular season and 35-12 in the postseason. That postseason record includes 10 trips to Super Sunday and seven wins on that day. Prescott hasn’t even made it out of divisional playoff weekend despite having homefield advantage two of the three times he’s made it to that round.

In what could be the final time Tom

Brady faces the Cowboys, a team he’s (6-0) against in his career, the Cowboys host the Buccaneers on Sunday night football to open the 2022 season. Thus far in his career Brady is (6-0) against Dallas in his illustrious career. That’s the most wins he has against any team without a loss in the league. In last year’s epic opening game the Bucs survived (31-29) on a last second field goal.

Following the game, Prescott told Brady, “we’ll see you again,” believing the two teams would matchup in the playoffs and that never happened.

Sunday night’s matchup should go a long way with questions being answered about both squads.