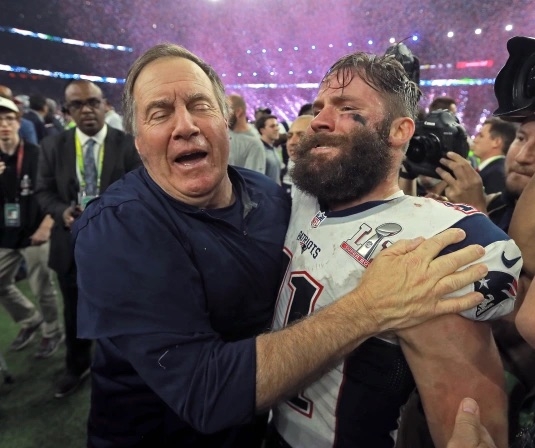 The New England Patriots are entering uncharted waters, as this is their first season since 2012 where they won’t have Tom Brady or offensive coordinator Josh McDaniels. Brady left via free agency in 2020, and McDaniels is his second chance as a head coach with the Las Vegas Raiders. McDaniels failed miserably in his first stint as a head coach when he led the Denver Broncos from 2009-10. With both of those franchise stalwarts who were there for every single one of the team’s nine Super Bowl appearances and six Super Bowl wins now gone, things are looking really awkward on the offensive side of the football in Foxboro.

What makes it strange, is head coach Bill Belichick decided against hiring an offensive coordinator for this season. Instead he’s opted to have his former defensive coordinator Matt Patricia and his former Special team’s coordinator Joe Judge handle the offense. Both have returned to NE after failed head coach stints with the Lions and Giants. But is that a smart move? In 2010 Belichick decided against having coordinators, and the team went (14-2), but again that was with Tom Brady. This team has promising second-year starter Mac Jones, but he’s no Brady.

“I think this has kind of fired him up, probably. This is a new challenge for Coach Belichick. He’s a competitor. He’s probably sitting, like, F everyone for talking about this. Screw these people. They don’t know what they are.”

“You know how Bill is when he gets in that auditorium. No one knows anything but the men in the room. And that’s what they’re gonna go with.

Based on the release of the coaching staff Belichick has no OC/DC by title the same exact thing he did in 2010.

This Could Stunt Mac Jones Growth:

The biggest takeaway from this development could be second-year quarterback Mac Jones, who in his rookie season led the Patriots to a (10-7) record and a playoff berth. He led all rookies with 22 touchdown passes, but that wasn’t under the tutelage of the proven offensive mastermind McDaniels. He’s now taking play calls from two guys who aren’t nearly as abreast or comfortable in that role.

This could have an adverse effect on Jones, as who does he turn to when things aren’t going well?

Something tells me Belichick hasn’t thought about that and if preseason was any indication this may not end well. But it’s BB, so he gets  the benefit of the doubt.