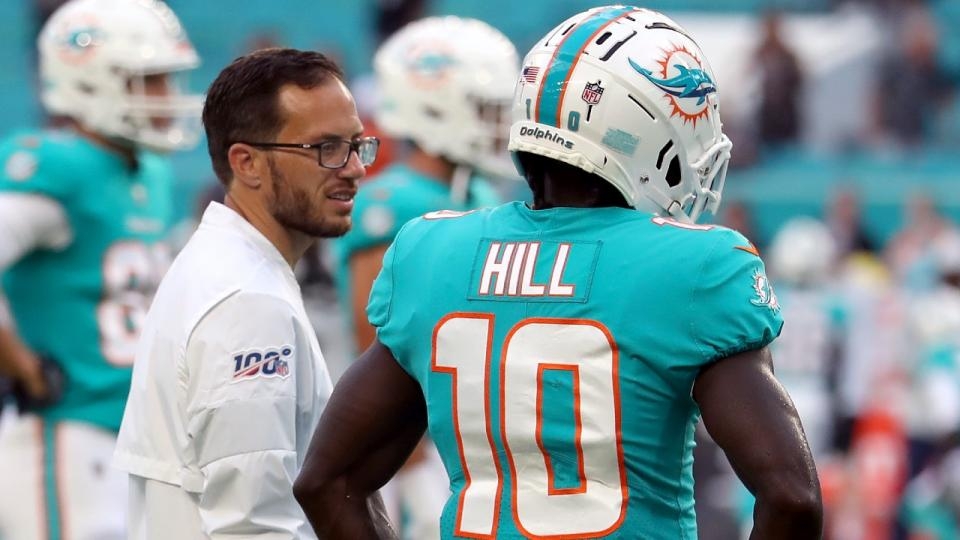 The Miami Dolphins began the 2022 with a pretty convincing and never in doubt (20-7) win over the New England Patriots. In the game quarterback Tua Tagovailoa went (23-33 for 270 yards and one touchdown). In the game new wide Dolphins wide receiver Tyreek Hill caught eight passes for 94 yards. First-year Fins head coach Mike McDaniel made a concerted effort to get the ball into the hands of his new toy. After one week all is well on the home front down in South Beach, so much that McDaniel made the call of the day.

Right before halftime, the Dolphins faced a 4th-and-7 from the 42-yard line, McDaniel rolled the dice looking for a kill shot. Tagovailoa threw a strike to his former Alabama teammate Jaylen Waddle who split the defense and took it the distance. The play for all intents and purposes ended the day in Foxboro before halftime.

Of course the walking soundbite himself Tyreek Hill, always has a way with words. And while they don’t always come out correctly, it still doesn’t stop him from spewing them. That was definitely the case following Sunday’s big win. In an interview here’s what the speedy former Oklahoma State Cowboys wide receiver  had this to say.

“He’s going to need a wheelbarrow for his nuts to carry around. Because he got a lot of cojones.”

Only Tyreek Hill can say something like that and it becomes a viral soundbite.

Hill Has Been Flapping His Guys Since His Arrival In South Beach:

Since his arrival down in Miami, Hill has been pretty consistent running his mouth. We’ve heard him say Tua is a more accurate quarterback than his former MVP and SB MVP-winning signal caller Patrick Mahomes. Seemed like Mahomes and head coach Andy Reid took that personal, as on Sunday Mahomes passed for 360 yards and five touchdowns.

Hill also said he felt like the Chiefs disrespected him and threw him to the side like trash. He even jumped in the DMs of YouTuber turned celebrity boxer Jake Paul girlfriend Julia Rose. To say Hill’s off-season was adventurous is an understatement, but based on what we’ve come to know about Reek he wouldn’t have it any other way.

Dolphins Have The Pieces To Be Dangerous:

With Hill and the aforementioned Waddle leading the way at wide receiver the Fins have speed to burn. But they also have plenty of homerun hitting ability in the backfield with Raheem Mostert and Chase Edmonds. Tight end Mike Gisecki is becoming a top guy at the position around the league. And a defense that’s one of the best as it pertains to forcing takeaways and making teams one-dimensional, McDaniel has the pieces. But it all comes back to the Tua and Hill relationship.

If Hill is happy that means things are going good, if not we’ll be hearing about it in the media.