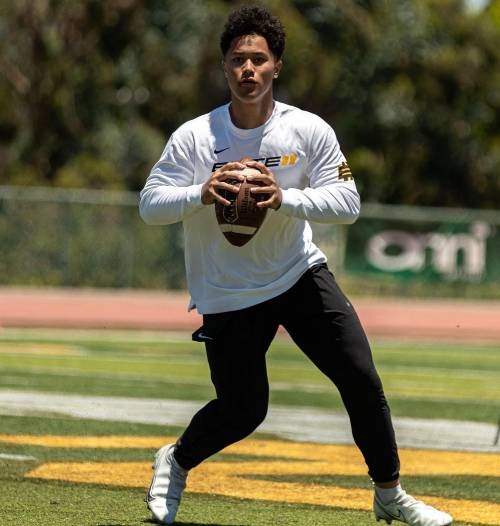 The Oregon Ducks have one of the most rabid and excitable fan bases in all of college football. They pack beautiful Autzen Stadium on the school’s beautiful campus located in Eugene weekly, to cheer on their Ducks. In the past the fan chants are rather engaging and actually funny. That was until this past weekend where the student section took things way too far. As the Ducks hosted the BYU Cougars a Mormon school located in Provo, Utah, fans chanted ….

That’s something that was totally uncalled for and completely unacceptable. The chant even rubbed rising 2024 quarterback prospect T.C Manumaleuna the wrong way. The Salem, Oregon native was their on an official visit, and when he and his dad who are members Latter Day Saints Church heard the chants rain down they headed for the exits.

In a phone interview with SBLive on Monday, the 2024 pro-style gunslinging prospect said this about the incident.

“We were up where all the students were sitting. We were right next to the student section. At first they weren’t saying harmful chants, but they got to ‘Eff the Mormons.’ At that time, just hearing that … it was kind of weird for me. It kind of hurt. My dad said let’s go right after. After hearing those chants we decided to leave.”

BYU has unfortunately been in the news for some other sports-related racist and insentive allegations. And while Manumaleuna says that single incident doesn’t change his mind about Oregon, it’s definitely a black eye on the program.

Manumaleuna Holds Four D-1 Offers: List Is Sure To Grow By Next Year

What’s ironic is BYU is also on his list of suitors who’ve shown interest in the dynamic strong-armed signal caller. In fact he’s already visited BYU during the offseason and plans to take another trip to a game in the coming weeks. The Cougars and head coach Kalani Sitake really like T.J. and his strengths fit what they wanna do on offense. He’s a lot like former BYU quarterback and 2021 NFL Draft No.2 overall pick, Zach Wilson.

“They are one of my biggest recruits. I plan to go to a game there.”

Cougars entered the stadium showing solidarity with the Oregon team and fan base by waving a flag that beared the name of a fallen player. Spencer Webb lost his life in July, after hitting his head on rockslides near campus in Eugene. But that didn’t stop the Oregon fans from chanting those insensitive words.

Last month the BYU women’s volleyball program came under fire when their fans allegedly made racist remarks towards a Duke volleyball player. After an investigation the school determined that they didn’t find any wrongdoing.

The alleged incident had some fallout as Dawn Staley cancelled a home and home basketball series with the Cougars immediately upon the news breaking.