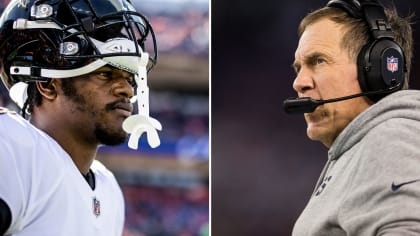 The Baltimore Ravens and New England Patriots will meet Sunday at Gillette Stadium in Foxboro, Massachusetts. Both teams come into Sunday’s contest at 1-1, but feeling a tad bit different. The Patriots won a hard fought road game at the Steelers last week, while the Ravens look to get back on the winning track after their stunning 42-38 loss to the Dolphins, in a game they led by 21 multiple times.

As the teams prepare for Sunday’s slugfest, Patriots head coach Bill Belichick talked about the talented Ravens dual-threat signal caller and how he’s progressed as a pocket passer since his arrival into the league in 2018. And how that could effect his new contract when he does get one, albeit in Baltimore or elsewhere.

“Without a doubt. It’s the type of player. The MVP type of candidate. I think he’s more than answered them. But, we’ll see what his contract is, that will answer them.”

Jackson and the Ravens were unable to come to an agreement on a lucrative long term contract extension prior to the season. Jackson is currently playing on the final year of his rookie deal, which happens to the fifth-year option of the deal. He’s set to earn just north of $23 million this season.

Jackson And Belichick Had Friendly Meeting At 2018 Pre-Draft Meeting:

During his Wednesday post practice presser, Jackson addressed his health saying his elbow is fine. He also elaborated on a 2018 pre-draft meeting with “The Hoodie.”

“I’ve seen Belichick smile. Usually when I see him, he’s puzzled face, a straight-faced guy. When I saw a smile, I was like, Damn, you’ve got humor.”

While the meeting didn’t lead to the Patriots taking the 2016 Heisman Trophy and 2019 NFL MVP winner, Belichick did tell Boston reporters this ….

“Great visit, spent a lot of time with him. Really interesting guy.”

Jackson’s Pocket Improvement Has Been On Display In The First Two Weeks:

Jackson spent his offseason bulking up, and working on his accuracy from the pocket. And thus far this season it looks as if that work is paying off. In two games this season he’s passed for 531 yards, six touchdowns and just one interception. He’s completing 64 percent of his passes and he’s also hit the deep ball with regularity, with four of his six touchdown tosses coming from at least 23 yards out.

With his elite athleticism and ability to play off-schedule, if he’s gonna continue to make strides in the passing game, the sky is the limit for Jackson and the Ravens passing game going forward.