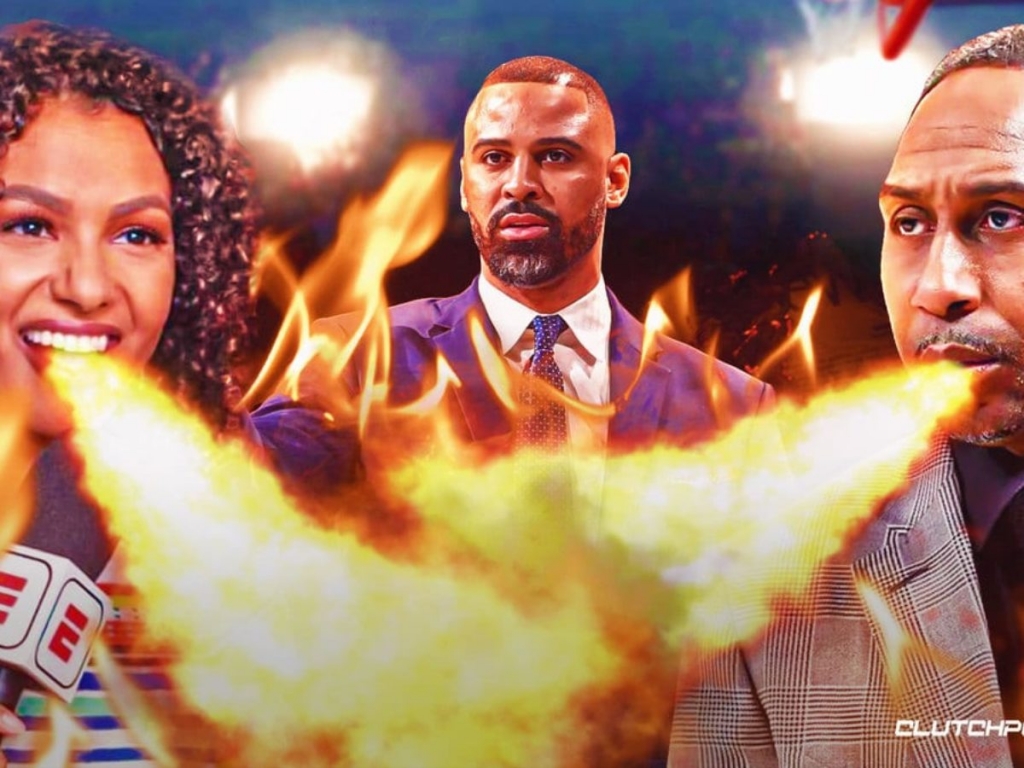 Stephen A. Smith And Malika Andrews Have A Heated Debate Over Ime Udoka Scandal

On Wednesday night sports world was taken by storm when ESPN NBA insider broke some news on Boston Celtics head coach Ime Udoka. The news was said to be enough that the NBA Finals runner-up in his first season could be suspended indefinitely. On Thursday that came to fruition as Udoka was in fact suspended indefinitely and for the entire 2022-23 season, with his return still very much in question once the suspension is complete. Udoka was suspended for having an consensual and intimate relationship with a female Celtics staffer.

That is in violation of the team’s code of conduct, so this is not a punishment levied down by the NBA as so many have stated. This is straight from team owner Wyc Grousbeck and President of basketball operations, Brad Stevens who’s also the team’s former head coach, who hired Udoka. Thursday’s announcement of a year-long suspension announcement has brought many varying opinions on how things were handled.

On Friday’s episode of ESPN’s First Take, things got a little tense between Stephen A. Smith and NBA Today host Malika Andrews.

Andrews the host of ESPN’s NBA Today called in to First Take right after the Celtics held their press conference making the announcement of Udoka’s fate. Andrews came ready to tangle with SAS, the star of First Take. Andrews’ tone from the jump sounded like she had already made her mind up on what she was or wasn’t gonna believe.

“If I could start with this: Stephen A., with all due respect, this is not about pointing the finger. Stop. What became apparent to me in the press conference is that we do not have all the information here. It was frustrating, to me, that the Celtics declined to elaborate or give more specifics about what exactly the rule-breaking was that led us to this point.”

She even insinuated about Stevens’ demeanor in the presser where he cursed about the socialmedia whilrwind as to who the woman may have been. Andrews called the speculation of the various women being with Udoka “gross and unnecessary.”

She even told SAS that they should debating whether the suspension was justified, instead of further blaming women, which Smith never did.

Telling SAS to stop on his own show is never gonna work and he was sure to let her know when he got his time to talk. And as far as Stevens being upset, he and the Celtics are to blame for how things got out, or how they’re handling things. They know they’re not bringing Udoka back at any point, and they have probable cause to fire him without pay. So why is he being kept?

Stephen A. responded to Andrews as only he can ….

“First of all. Let me be very clear, I don’t appreciate where you’re going with that. I’m not blaming anybody but Ime Udoka. He deserved to be fired if they were going to fire him. If you’re not going to fire him, then don’t fire him. My issue is all of this being publicized. The point that I’m trying to make…”

When Andrews went interrupt SAS wasn’t having any of it.

NBA Basketball Analyst Matt Barnes Even Chimed In On The Matter:

Barnes originally posted a response to

Udoka’s situation defending the coach. But after reportedly getting more solid facts, he returned on Friday with a new outlook on it. Here’s what he said via his Instagram account.

“Since I’m a part of the media now and try not to be like everyone else — I try to report and talk with facts and honestly and I clearly have to say, without knowing all the facts, I spoke in Ime Udoka’s defense.

Barnes goes onto say it’s some things he found out that he can’t condone or support. He says it’s much deeper than what we’ve heard so far and he’s praying for all parties involved.

If it’s that serious why does Udoka still have a job at all?