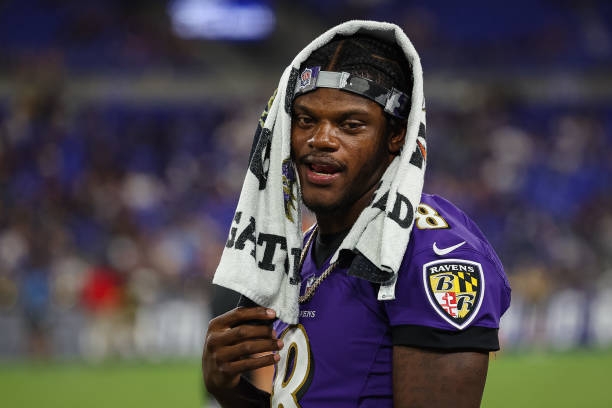 No Contract, No Problem | Lamar Jackson With Another Great Performance, Looking Like His 2019 MVP Season

The Baltimore Ravens and star quarterback Lamar Jackson couldn’t come to a contract extension prior to the beginning of the 2022 NFL season. But that hasn’t stopped the 2019 unanimous MVP from showing up and showing out weekly. Jackson has led the Ravens to a 2-1 start this season, but it’s how he’s doing it, with his arm and legs. In fact, thus far this season Jackson has 10 passing touchdowns and just two interceptions. He’s also rushed for  253 yards and two more touchdowns in the first three games. In last week’s 42-38 loss to the Dolphins, Jackson became the first player in NFL history to have a touchdown pass and run of at least 75 yards in the same game.

Jackson’s professionalism and leadership has been on full display despite him and the Ravens not agreeing on that lucrative long term extension prior to the season. Following Sunday’s 37-26 road win over the Patriots, head coach John Harbaugh raved about his star signal caller.

“I just think it’s a natural next step in terms of finding his rhythm during the week, what he’s looking at, how he studies defenses, how he breaks defenses down. It’s not a lightbulb thing, it’s an evolution of studying the game that you see quarterbacks go through. He’s still a young quarterback. You watch him play, does it look like he understands what he’s going up against and what he’s dealing with out there? Right, and that’s the result of that process and that work effort that he’s putting in. It’s really impressive.”

After three weeks of football Jackson is arguably the leading candidate to take home the MVP award at season’s end.

After years of having one of the best run offense in the NFL and struggling to get the passing game off the ground, the Ravens seem to have the passing game going as the running game minus Lamar’s dynamic playmaking struggling. Offensive coordinator Greg Roman, passing game coordinator Chris Hewitt and wide receivers coach Tee Martin, have created a scheme that fits Jackson’s strengths, which are multiple combo routes and taking deep shots while also occupying the middle of the field with All-Pro tight end Mark Andrews.

The maturation of Jackson as a passer and information processor has allowed more attacking downfield. Receivers Devin Duvernay and Rashod Bateman are showing signs and the aforementioned Andrews is “Mr. Reliable.” Those three have been on the receiving end of eight of LJ8’s ten touchdown tosses. With other weaponry like rookie hybrid tight end Isaiah Likely and veteran DeMarcus Robinson still adjusting to the scheme, the sky is the limit for this passing game. And especially if Jackson is gonna keep developing in his mental approach to understanding defenses, pre and post snap.

Ravens Have To Lean Heavily On Lamar And Offense: Defense Is Atrocious

In the past the Ravens had the luxury of having Jackson doing what he does, but that was always accompanied by a strong, stout defense and rugged running game. That is no more as the Ravens can’t stop a nosebleed. And the run game seems to be stuck in quicksand. That means more Jackson and more big plays, and the way he’s playing that might not be a bad thing.

At season’s end Baltimore many regret not paying Jackson. Yesterday’s is no longer tomorrow’s price.