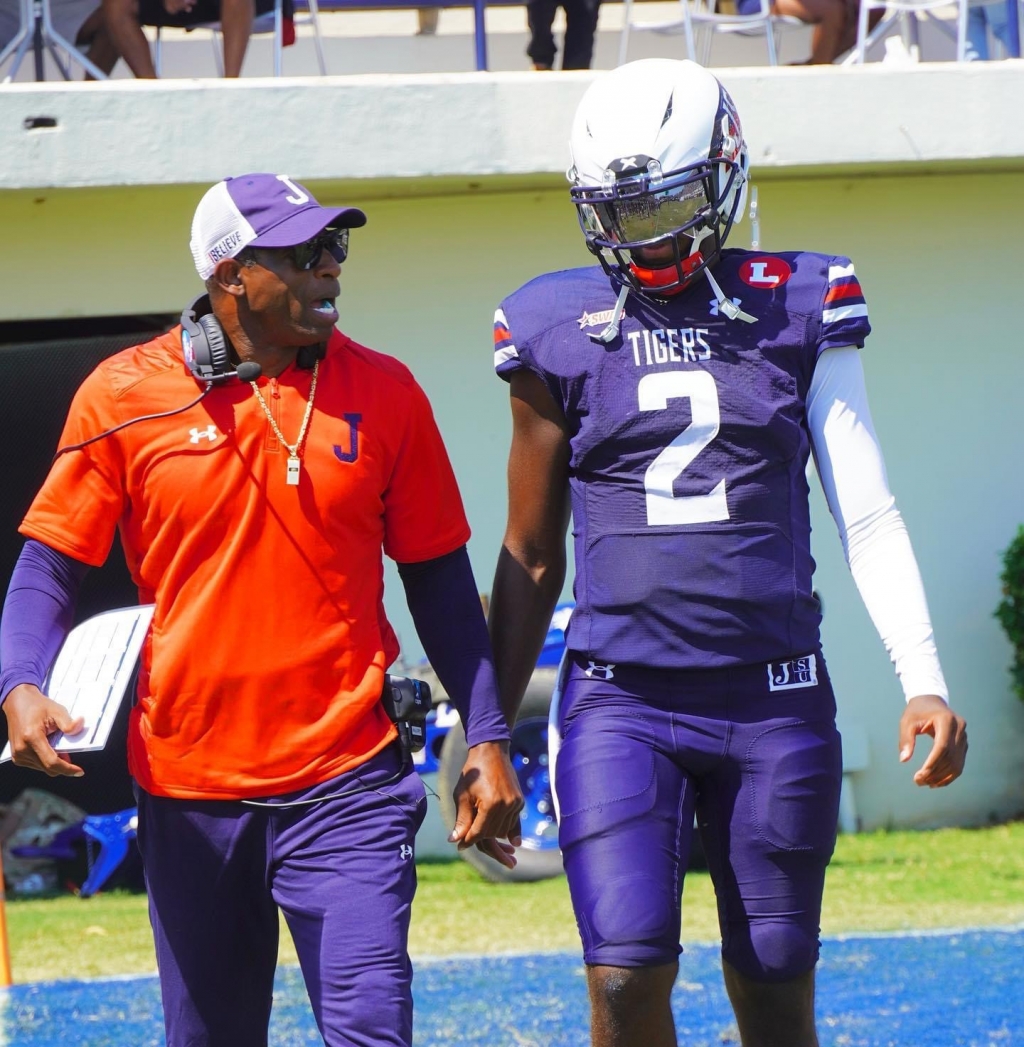 The Jackson State under the leadership of Pro Football Hall of Famer Deion Sanders, and his son Shedeur have taken the college football by storm. The last two seasons combined they’ve gone 15-2, winning their first SWAC championship since 2007 and playing in their first Celebration Bowl. This season the Tigers have come out and dismantled their first four opponents in FAMU, Tennessee State, Grambling State and Mississippi Valley State by outscoring them a combined 190-37. In doing so, Shedeur the reigning Jerry Rice Award winner, given annually to the top freshman in FCS football, has started this season on fire.

In four games this season the strong-armed former four-star prospect has passed for 1,381 yards, 14 touchdowns and just one interception. In Saturday’s 49-7 shellacking of MVSU Sanders reached career highs in yards with 425, completions with 40 and his 78 percent completion percentage was the best he’s ever had in a collegiate game.

As a result of his play, Coach Prime believes he should be getting some Heisman consideration. During Monday’s SWAC Media Day conference call, Sanders has this to say about his son and QB.

“When you put his numbers up next to the guys at Power Fives, he’s doing as much or more than they’re doing right now. So when they start talking about Heisman — which I saw before the previous game — I got upset that they didn’t mention us, period. Forget that he’s my son, that his last name is Sanders — any other man doing what he’s doing and accomplishing what he’s accomplishing this far, this early on — deserves recognition.”

Deion is wrong in his take, while Shedeur and JSU are dominating FCS Black College Football that doesn’t equate to being recognized for the Heisman. Th defenses Shedeur is doing this stuff against aren’t even talked about. Not since 1994 has a player from an FCS received Heisman recognition, and then it was unheard of.

Sanders went onto also say no way Shedeur can be a NFL prospect, but not a Heisman candidate.

“You can’t tell me he can play in the NFL, but he’s not good enough to be in the Heisman running. That’s a lie.”

Only two former FCS players have ever received Heisman votes, they were Doug Williams of Grambling State in the 1970’s and the late Steve McNair at Alcorn State in the 1990’s. In fact, McNair actually finished thirds behind the 1994 winner, the late Rahsaan Salaam and runner-up Ki-Jana Carter. Both of them played at Power programs. Houston Cougars quarterback Andre Ware in 1989 and BYU Cougars quarterback Ty Detmer in 1990 are the last two to win it that weren’t from Power Five conferences.

It’s okay for Coach Prime to champion for his son and QB but his body of work against some pretty pedestrian competition doesn’t help his efforts to get him the exposure or notoriety.

Shedeur Is Lining Himself Up To Be In The Walter Payton Award Race:

The FCS equivalent to the Heisman Trophy is the Walter Payton Award which is given annually to the most outstanding player in the NCAA Football Championship Subdivision.

Sanders is a prime candidate to take that award or at least be a finalist for it. Playing in the new “air raid of the south,” offense under new offensive coordinator Brett Bartolone should only continue to enhance his chances at winning the award. With Sanders being just a true sophomore he has the opportunity to maybe win it multiple times. But that’s where we draw the line, he won’t get the Heisman love because of today’s brand of football being played. He isn’t the only the QB playing in an offensive friendly system that allows you to stat pad weekly. That’s the norm around college football these days.