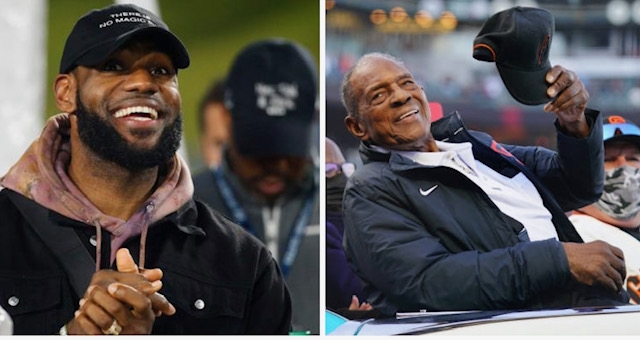 Major League Baseball (MLB) Hall Of Famer and legend Willie Mays who began his baseball career in the Negro Leagues with the Birmingham Black Barons in 1948, before joining the New York/San Francisco Giants from 1951 to 1973, is now the subject of an upcoming HBO Sports released documentary "SAY HEY, WILLIE MAYS!", in association with with Company Name, UNINTERRUPTED, and MLB.

"Over the years, the fans have given me so much joy, and I am excited to express my thanks again through this wonderful documentary and its telling of the story of my career and life," Mays said. "I have worked hard and been fortunate to do many amazing things over the course of my life, and I am excited and proud that the people who see this film, including younger fans who never saw me play, will have the chance to relive this great journey with me and have a few laughs along the way.”

Mays known for his dynamic plays on the field,  but his over-the-shoulder catch of a fly ball in Game 1 of the 1954 World Series is one of the most famous baseball plays that has stood the test of time. The former National Rookie Of The Year, 12-time Gold Glove recipient, MVP, and World Series champion truly has a story to tell where all can learn from. Directed by Nelson George, the documentary includes exclusive interviews with Mays and his family.

It's been one of the highlights of my life to get to talk with and document the life of Willie Mays, perhaps baseball's greatest player and certainly its most charismatic personality," George said. "Not only was he a staple on the Baseball Game of the Week, but crossed over into talk shows and night time entertainment when Black faces were rare. The film is very much a tale of mentorship. Willie was schooled in life and baseball by his father Cat and Negro League players. Later Willie looked out for scores of young Black players including his godson Barry Bonds. An epic American life.”

The film takes an incredible, eye-opening look through Mays' formative years from the Negro League baseball years in Birmingham, to landing in the country’s biggest stage in New York at the inception of televised games, and expanding with baseball to the west coast during the peak of the Civil Rights movement. Mays transfixed fans from coast to coast with his style, jubilant persona and contagious smile, and helped to erode racial barriers in attempts to move the sport of baseball, and the American dialog forward.

Mays was inducted into the National Baseball Hall of Fame in 1979 with over 94% of all votes, the fourth-highest total ever at the time of his election. In 2015, former President Barack Obama presented him with the Presidential Medal of Freedom.

Just a year after his 90th birthday, fans will have an opportunity to hear from and witness the history of a living legend in the "Say Hey Kid" himself, on Wednesday November 8th at 9PM ET/PT on HBO. The film will be premiered at  the 2022 UrbanWorld Film Festival on October 27.