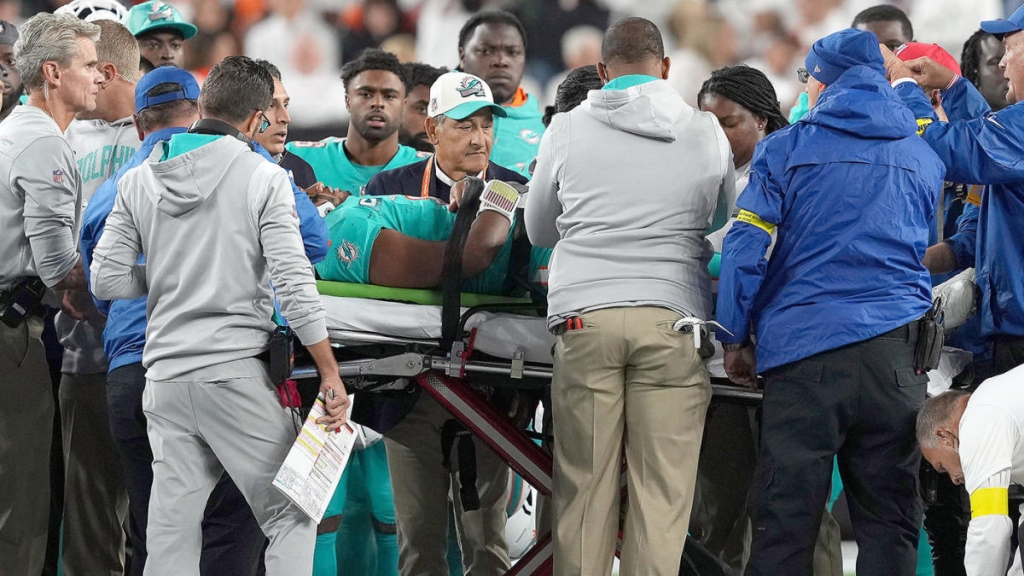 Miami Dolphins quarterback Tua Tagovailoa was carted off the field at Paul Brown Stadium on Thursday night in Cincinnati. This after hitting his head and neck on the field turf on the stadium’s playing surface. This was the second time in four days that Tagovailoa his head and neck area pretty hard on the ground after being hit by the opposing team. On Sunday he got up pretty wobbly and in many ways out on his feet. He and the team said it was a back injury, but when has a back injury caused someone to stagger and look woozy. On Thursday night he didn’t get up after being hit, in fact his hands sort of went into stunned  paralysis and didn’t move.

Tagovailoa was taken to the hospital where reports are he has movement in all of his extremities and he’s conscious. Considering what could’ve happened, that’s the best report one could receive.

Since Sunday there’s been grumblings about how Tua could’ve been misdiagnosed upon returning to Sunday’s win over the Bills. But Tagovailoa reportedly passed all the concussion protocol required to re-enter Sunday’s contest.

Following Sunday’s scare, neuropathologist Ben Omalu who published the first link of CTE and the game of football in 2005, says Tagovailoa definitely had a concussion on Sunday and shouldn’t have played on Thursday. In an interview with TMZ Sports, Omalu said Tagovailoa’s body language displayed a concussion.

“There’s no doubt”, he told the media outlet.

“That moment he hits his head on the turf, he suffered permanent brain damage.”

Omalu says had he been the assigned neurotrama consultant at Sunday’s game he wouldn’t have permitted him to return to the field. If that happens there’s no way Tagovailoa would’ve cleared concussion protocol prior to Thursday’s road game at Cincinnati. Meaning he would’ve had 10-14 days to get better and make sure he was really okay to return to the field. But three to four days later is just too risky and shouldn’t have happened.

Omalu also said the health of the player ultimately falls on them. They have care about their own well-being first and foremost.

“The duty falls on the players. The NFL did not point a gun on his head and say, You must go back to play. He could have said, No, OK?  Your life should be worth more to you than any amount of money. We need to have our value judgment system in place here. Your life is worth more than $10 billion because you can’t replace your life and you only have one life, so the duty falls on the players.”

Omalu is correct, but it’s also the team and league’s responsibility to help protect players from themselves. It was obvious Tua was beyond woozy on Sunday and him being cleared then and for Thursday, in many ways seems unfathomable.

The good news is Tagovailoa was discharged from an Cincinnati area hospital following the game and is expected to travel back to Miami with his team. Now he’ll be taken through a battery of litmus tests over the next ten days to see if he clears protocol to play in the team’s next game against the division rival Jets on October 9th.

Without Tua the Fins just aren’t contenders, while veteran Teddy Bridgewater is a serviceable backup he just can’t make the throws to utilize the Fins weapons downfield in Tyreek Hill and Jaylen Waddle.