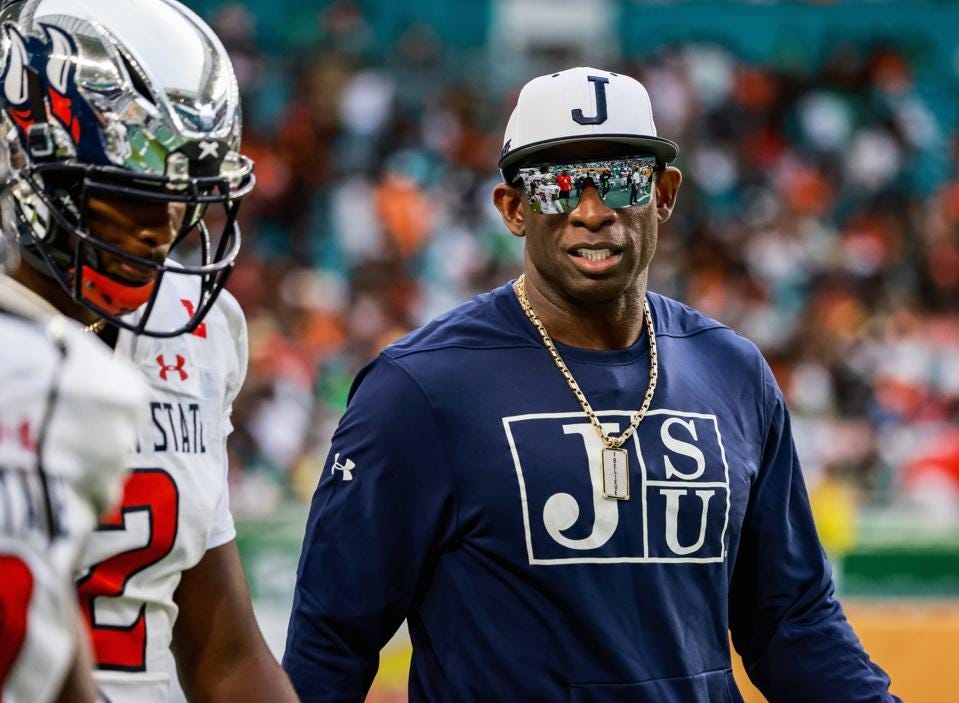 Jackson State head coach and Pro Football Hall of Famer Deion Sanders has been blunt about his intentions as the head of the JSU Tigers football program. As he’s done since his September 2020 hiring, Coach Prime has repeatedly told the media and anyone else who’s listening that the vision for his program is what he’s focused on and he’s gonna do everything in his power to see it come to fruition.

Sanders Could Care Less About Polls:

During his presser it was brought to Sanders attention that his Tigers were ranked No.9 in the FCS Top 25. In typical Sanders fashion he didn’t seem moved at all by the ranking, saying this.

Sanders could care less about the rankings helping as it pertains to playoff seeding. He’s focused solely on the Celebration Bowl in Atlanta.

“What playoffs? We want to go to the Celebration Bowl.”

It’s all about revenue and the FCS playoffs doesn’t come close to the lucrative big money payout the competing schools receive for the game.

The Celebration Bowl began in 2015 and is currently played between the winners of the SWAC and MEAC conferences. It is the only bowl game played between two Football Championship Subdivision programs. Last season Coach Prime’s Tigers lost to the South Carolina State Bulldogs, but both schools took home a $1 million payday for making it to the game.

The FAMU Rattlers who didn’t qualify for the Celebration Bowl by virtue of a head-to-head loss to JSU, were chosen for the FCS playoffs once Coach Prime’s squad made the Celebration Bowl. And while head coach Willie Simmons and his guys were happy to be there, playing in the bowl game is a much more lucrative deal.

In 2018, SWAC Commissioner Charles McClelland even said that other FCS teams would like the opportunity to participate in bowl games instead of the current playoffs.

“There are other FCS conferences inquiring about how they can be part of  a bowl game that the SWAC and MEAC are participating in. It really tells you how far this game has come.”

While that hasn’t come to fruition it seems to be something that other programs wouldn’t mind see happen. As far as Coach Prime and JSU go, it’s all about making the Celebration Bowl and getting that payday.

Something tells me we’re gonna see a lot of JSU in that game, collecting those paychecks and trophies with regularity.

The FBS schools all get big money to participate in a variety of different bowl games, maybe the FCS should look at maybe doing the same.