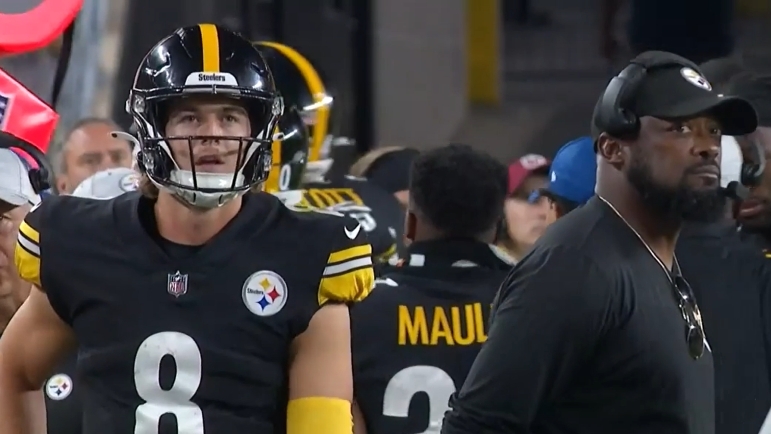 Through the first three weeks of the NFL season the Pittsburgh Steelers offense just hasn’t gotten it done. With the team sitting at 1-2 and struggling to move the football against the New York Jets, head coach Mike Tomlin decided to bench starter Mitch Trubisky in favor of 2022 first round pick Kenny Pickett. And while the change didn’t lead to victory, it did inject some life into the Steelers listless and ineffective offense. In the end Pickett’s hail mary attempt as the gun sounded was picked off by the Jets in their 24-20 road win.

Following the game Tomlin explained his reasoning for the quarterback change, and in doing so he didn’t commit to either signal caller for next week.

“I thought we needed a spark. We thought he could provide a spark for us.”

“We did what we needed to do to put ourselves  in position to win this game. We’ll do it again. I’d just like to keep it where we are in terms of what transpired here today. We’ll deal with next week, next week.”

While Tomlin is non-committal on his starter for next week’s road game at the 3-1 Bills, one would have to believe he sticks with the rookie.

Tomlin Has To Stick With Pickett: Trubisky Experiment Should Be Over

Tomlin is walking a fine line, the team signed Mitch Trubisky in the offseason as a bridge to rookie Kenny Pickett, but Trubisky hasn’t done anything that jumps off the screen at the position. His under six yards per completion coming into Sunday’s game was ranked dead last in the NFL. That’s unfathomable considering the weapons the Steelers have in running back Najee Harris, wideouts Diontae Johnson, Chase Claypool and rookie George Pickens. Throw in the talented, but extremely underutilized tight end, Pat Freiermuth and this offense is loaded.

When Tomlin made the switch the Steelers had accrued just six first downs and trailed the Jets. Upon entering the game Pickett threw an interception on a ball that should’ve been caught by the big-bodied Claypool, but he tipped it and it was intercepted. While, Pickett tossed three interceptions, two weren’t his fault, the one to Claypool and the hail mary don’t count. Pickett led the team on two scoring drives as he used his legs for touchdowns displaying the dual-threat ability we witnessed weekly at Pitt in 2021.

For the game he went 10-13 for 120 and three picks. One thing he did show was the moment isn’t too big for him and a full week of reps as the starter could do wonders for him and the Steelers.

Pickett talked about his play in his postgame presser ….

“I just played with an edge.  That was something I wanted to bring to the table, I do not like to lose, this is not a good feeling. I don’t want it to be a familiar feeling, so I definitely want to get back out there and get a victory and get us back on track.”

Playcalling Has Been Putrid In “The Burgh”

Tomlin may need to look at replacing offensive coordinator Matt Canada whose schemes don’t seem to fit the personnel. Quarterbacks coach Mike Sullivan is well-respected around the league. He could be key for Pickett going forward, as they’re together more than the QB and OC.