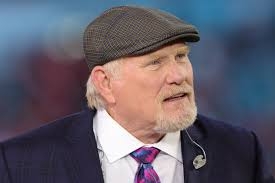 Fox Sports analyst and Pro Football Hall of Famer Terry Bradshaw is known for his quirky takes and quick-witted way with words. Over the years he’s become known for his enthusiasm as he does the highlights of Sunday’s NFL games during halftime and the postgame show. This season for Bradshaw has been a bit of a challenge as the former Pittsburgh Steelers legend has struggled to get through in-game wrap-ups. In fact the 1970 No.1 overall pick out of Louisiana Tech, has even struggled to get his words out often stuttering or fumbling through the segment.

Following last week’s games fans took to social media to talk about Bradshaw’s health and many even questioned if the four-time Super Bowl winner and two-time Super Bowl MVP should call it a career on the set.

After getting wind of the comments, Bradshaw took to Facebook Live to discuss his health and what he’s been dealing with over the last year.

“People are saying that I’m sick and I’m dying, okay, so let’s put that rumor to rest. I am not sick, I am not dying as I sit here and do this interview with you.”

“I’m not gonna deny I’ve had two bouts of cancer, one in November and a different one in March — two different cancers. My first follow-ups are coming in 40 days, or three weeks or something, so I will know how we’re doing. But as of now, the cancers are not there.”

Bradshaw opening up about his health is a welcome sight, because so many times people make assumptions and say things about people not knowing what a person may really be dealing with.

Bradshaw Discusses Being Short Of Breath During Segments:

During certain segments Bradshaw has looked winded and short of breath, and has actually had to pause in order to finish his comment. During his FB Live discussion he opened up about why that’s happening as often as it has through the first couple weeks of the NFL season.

“I have a lung issue from surgery where a nerve has blocked and what is happening primarily now is asthma. When I get to California I have a hard time out there.

“So, I have been dealing with a lot of stuff, I don’t figure it’s anybody’s business and I’m not someone who wants to talk about it and have you out there going, Woe is me, poor Terry. No I hate that. I’m just telling you to shut everybody up…. I don’t feel like I need to explain all this but I’m a little tired of people talking about me and I’m tired of people speculating I’m dying because I lose my breath on the Fox show.”

Bradshaw just cleared the air, so the assumptions about his health can stop. As he stated he didn’t have to tell anyone, but as a person you can only take so much of people constantly throwing you under the bus about not being able to do your job. Especially not knowing the health scares you’ve dealt with over the last year.

Bradshaw Led Steelers To Four Super Bowls In The 70’s:

During the 1970’s the Pittsburgh Steelers won four Super Bowls in in a six season span. Led by Bradshaw and a defense known as the “Steel Curtain.” For his efforts TB was elected to the Pro Football Hall of Fame in 1996. Known for his toughness and grit, Bradshaw embodied what the “Steel City,” is all about.