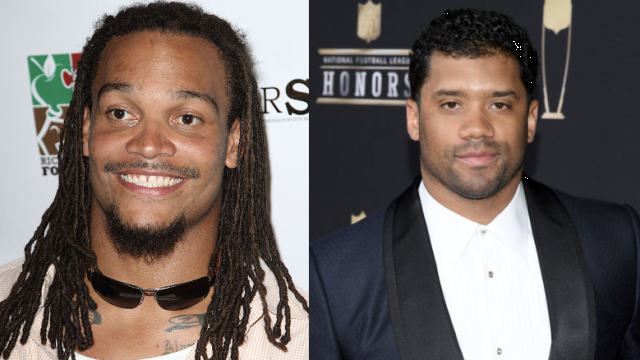 Former NFL linebacker and co-host of “The Pivot Podcast, Channing Crowder isn’t a fan of Denver Broncos quarterback Russell Wilson. Crowder has continuously unleashed verbal attacks on the star quarterback, calling him lame and corny amongst other things. Even after receiving backlash for his comments, Crowder hasn’t changed his tune, in fact he’s continued his assault on Wilson’s character. All while saying he respects the man he is, but he’s a cornball.

During a recent appearance on the podcast, Mr. Jay Hill Network, the outspoken Crowder once again praised Wilson and then added in his usual cornball brother talk.

When Hill asked him about his past comments on Wilson, Crowder stood by what he said.

“The Russell Wilson thing. I don’t care what this man does, he’s lame I don’t need a because!”

Crowder asked Hill if he thought, “Wilson was lame.”

Hill quickly gave Wilson credit for being what a Black should aspire to be.

“No he’s not lame. First of all he’s an embodiment of what a black man should be. He’s good to his wife…”

Crowder asked Hill …. “That doesn’t make you not lame.”

Hill asked …. “What makes him lame then?”

Crowder then asks Hill this ….

“Do you wanna hang with this m-fer on a Friday night? That’s what lame means. That’s what it is.”

Crowder’s definition of lame is pretty vague and baseless, and hearing him call Wilson a lame is actually kind of confusing. And the reasoning for it is even more awkward.

As he’s done in the past Crowder credits Wilson with being a standup guy as it pertains to being a husband, dad etc.

But in the same sentence Crowder bashed him again for being what he considers lame.

“The n*gg* is a f*ck*ng duck…  because of how he talks. You see the videos. You see all the stuff. You see the recent one where he was picking out his suits? He changes up his voice. He’s square. It’s a big problem but it’s not a big problem.”

So which way is up? Is he cool or lame, because the attributes Crowder describes as good above Wilson are what men everywhere should be striving for. The things he’s calling him lame for is stuff he’s noticing because he may be watching Wilson a little too closely.

Wilson Takes It All In Stride: Winning Regardless

No matter what’s being said about Russell Wilson he’s totally unbothered. Sitting on a brand new contract that will pay him $49 million per season. He’s also married to pop star Ciara and together they purchased the most expensive house in the Denver area upon his trade to the Broncos.

Now Wilson and the Broncos have to figure out  how to get their offense on track under first-year head coach Nathaniel Hackett. Sitting at 2-2 and without star tailback Javonte Williams who’s out for the season with a torn ACL.