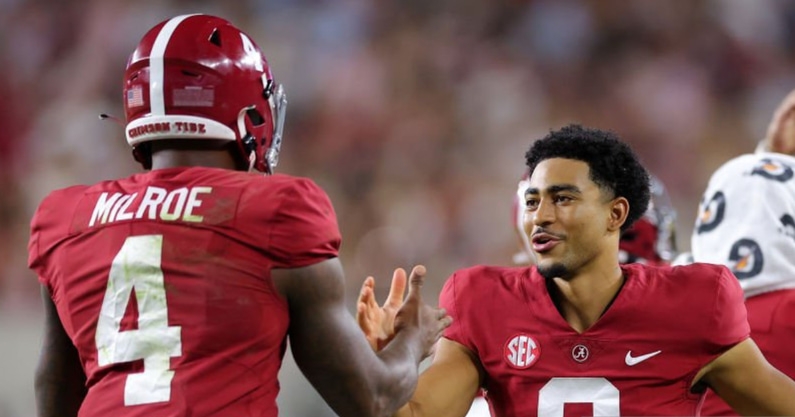 With Heisman Trophy Winner Bryce Young Sidelined | Alabama May Have To Turn Back The Clock, But They Can

Last Saturday in Fayetteville, Arkansas the collective breath of all Alabama fans including myself was put to the test. Reigning Heisman Trophy winner Bryce Young suffered a sprained AC joint near the shoulder area and is considered day-to-day. At the time of Young’s injury former two-time national championship winning Alabama quarterback AJ McCarron told everyone not to fret as he described exactly what the injury was, he also let it be knows that he’d dealt with that type of injury a handful of times himself. And guess what? He was dead on.

When Young went down Alabama led 14-0 and was driving to take an even bigger lead. While many other programs in the country would’ve panicked, not the Crimson Tide, who recruit at the highest of levels. Enter true sophomore, the impressively built Jalen Milroe, a four-star recruit in the class of 2021. Who’s the fastest player on the team at 6-foot-2 and 215 pounds.

With Milroe the lead grew to as big as 28-0 before special teams mistakes and boneheaded penalties helped the Razorbacks score 23 consecutive points to pull within 28-23. While most backup quarterbacks playing infront of 76,000 fans who want you to fail would panic, not Milroe who on third and 15 broke a 77-yard run to setup a touchdown by running back Jase McClellan.

Following the game head coach Nick Saban had this to say about Milroe who rushed for 91 and passed for 65 tallying two total touchdowns while filling in for his star QB.

“There are things that Jalen Milford does well. If he has to play, we’ll practice him more. I thought he did a good job of managing the game today.”

Should Alabama Be Confident Going Forward Without Young?

Young’s injury comes at a precarious time in the Crimson Tide’s schedule with the underachieving but talented Texas A&M Aggies coming to Tuscaloosa on Saturday. It’s a rematch of last year’s chippy contest won by the Aggies in an upset 41-38. Things in the rivalry went way south this offseason when Saban accused Aggies head coach and his former offensive coordinator of buying his top ranked recruiting class which featured a record eight five stars. Then it’s onto Tennessee who has one of the best offenses in the country.

The Crimson Tide can beat both the Aggies and Volunteers without Young, but it’ll much easier to defeat the Aggies in Bryant-Denny Stadium versus winning on the road at Neyland Stadium.

Two reasons why Alabama can win both games if Young needs more than a week to recover.

The injury to Bryce Young forced pass-happy offensive coordinator Bill O’Brien to get back to old school Alabama football which is smash-mouth football. Starting tailback Jahmyr Gibbs finished Saturday’s game with 206 yards rushing on 18 carries including two touchdown runs of 70 yards plus on back-to-back possessions in the fourth quarter to blow the game open against Arkansas again. Plus the defense has been dynamite with true freshman defensive tackle Jaheim Oatis looking like the second coming of former Tide star turned Jets first-round pick Quinnen Williams.

BAMA is back to stuffing the run making teams one-dimensional which allows Heisman candidate Will Anderson tee off from the edge. A veteran and savvy linebacker and secondary group gives Saban much confidence in playing Milroe if need be.

The team also trust Milroe, he was dynamic in the spring game and again in relief against a ranked SEC foe.

Nothing Comes Easy In SEC: BAMA Will Be Fine Until Young Is Fully Healthy

Nothing comes easy in the SEC, but it helps to have the best coach in the sport and loads of talent everywhere. Yes they need Bryce Young to win a national championship, but the Milroe  move could give the Tide another offense to throw at teams going forward even when Young does return.