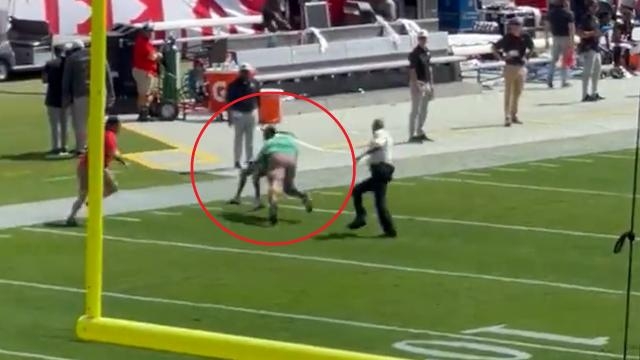 Buccaneers Security Tackles Kid For Being On The Field During Game

Fans and sporting events just go together, you get the cheering, booing and of course the occasional chants. But at times fans become a little too comfortable and do things like run on the field, court etc. That was exactly the case on Sunday at Raymond James Stadium as either a child or young adult ran on the field, before being tackled by stadium security. As the person attempted to get away from security they were tackled and then removed from the stadium’s field turf.

ESPN reporter Jenna Laine had this to say about the all too familiar incident that’s been happening around stadiums around the NFL way too often.

“A CHILD (or maybe just a very small adult) just rushed the field while the Bucs we’re lining up to kick a PAT. Have never seen that before. Got tackled by security and was pinned down for several seconds before escorted off to the northeast corner of @RJStadium.”

This incident happens to be the second consecutive week that a fan ran on the field during an NFL game. And each time they’ve been tackled accordingly.

During last Monday night’s divisional matchup between the Los Angeles Rams and San Francisco 49ers, a fan ran on the field, only to be tackled by former All-Pro linebacker Bobby Wagner. The fan seemed to be doing some sort of animal right protest as pink smoke appeared from the flare he was carrying.

The fan identified as Alex Taylor of Direct Action Everywhere, has filed charges against Wagner who hasn’t been charged with any wrongdoing.

“I was scared for my life, the protester could have had a bomb. Bobby Wagner saved our lives.”

Wagner the eight-time All-Pro and eight-time Pro Bowler also chimed in on why he felt the need to tackle the protester.

Fans Have To Be Held Accountable For The Risky Behavior:

Fans who do this stupid act should not be arrested, but have their tickets revoked going forward. And if they’re using another fan’s tickets unfortunately their tickets should be revoked. That type of stuff is putting players, coaches and all other fans as risk. Hopefully the league gets a better grip on this happening as it’s become sort of the norm a few times per season.