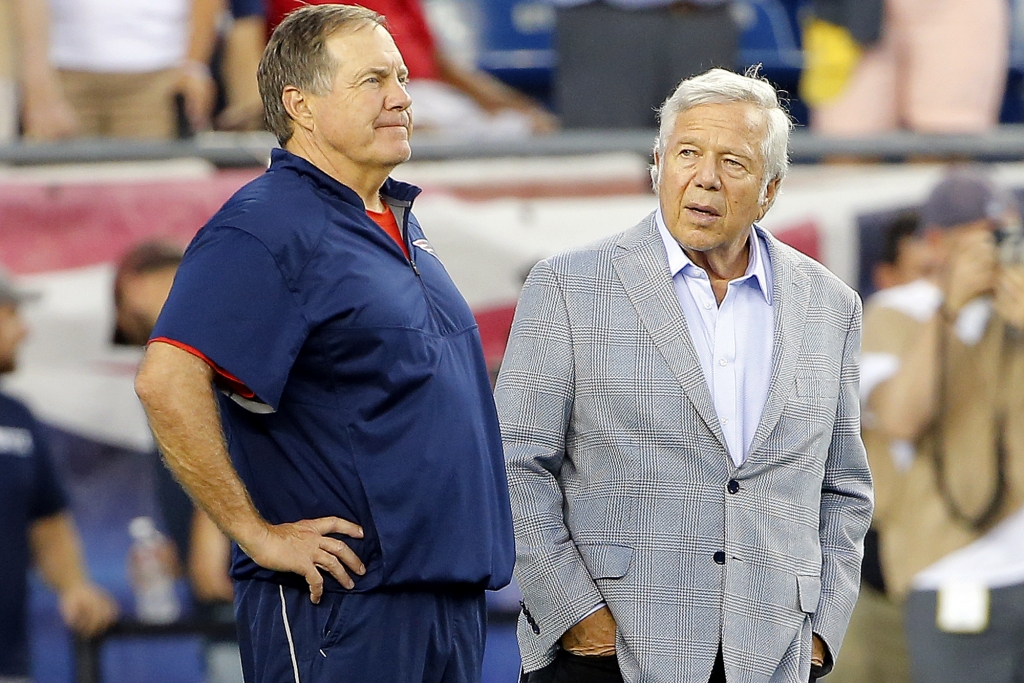 New England Patriots owner Bob Kraft and head coach Bill Belichick have been boss and employee for 23 seasons. One would think when you work together as long as they have that you’d have a relationship outside of work. And while we assume they do, one would also think that if one were getting married the other would attend. That wasn’t the case over the weekend as Kraft got married in NYC and Belichick was nowhere in sight. Yes he was prepping the team for Sunday’sgame versus the Browns which they won going away, 38-15, but this is the NFL where salaries are big and flights at easy to come by.

BB could’ve easily flew to NYC and back to Cleveland without a hitch, but he didn’t. He instead opted to stay back and prep for the game. And while he and Kraft reportedly discussed that it still seems odd to see Tom Brady there and not Belichick, doesn’t it?

During his weekly radio appearance on “The Greg Hill Show,” Belichick explained why  he missed the star-studded event which featured legendary singer Elton John and rapper Meek Mill two close friends of Kraft.

“Yeah, Robert and I talked about it a couple times. I was planning to go, but in the end it was just too much at the end of the week and we both decided the best thing for me to do was to try to get ready to beat Cleveland. We’ll celebrate at another time, but very happy for Robert and Dana. I heard it was a special night, so, sorry I missed it, but I know it was a great night for him. I’m very happy for him.”

While that sounds good, it’s just odd that someone who’s been around Kraft in that capacity for 23 years now wouldn’t attend his wedding.

Did The Tom Brady RSVP Play A Role In Belichick Not Attending?

While, Belichick skipped the wedding and his team dominated the Browns on the road. His former quarterback for 20 seasons, Tom Brady attended the wedding and wasn’t as successful Sunday as the Buccaneers lost 20-18 at the reeling Steelers. While many tried to make Brady’s attendance a reason for the Bucs failures on Sunday, first-year head coach Todd Bowles wasn’t buying it. The defensive guru told reporters this.

“No, he didn’t miss anything. He had a full week of practice.”

As for Belichick, he and Brady’s 20-year relationship didn’t end on the greatest of terms. And when Brady returned to Foxboro in 2021 as a member of the Buccaneers, he met with Belichick in private, while Kraft exuded his love and appreciation for Brady publicly, with hugs and tons of thanks for everything.

Brady says they do have a personal relationship, but we’ve never heard Belichick say the same. And the way things came to an end, just looked like things had run it’s course with those two.

Patriots Are .500 Despite Being Hit By The Injury Bug:

After beginning the season 1-3, the Pats have outscored their last two opponents, Lions and Browns 67-15 behind third-string QB Bailey Zappe, whom Kraft loves. It’s the same exact record as Brady’s Buccaneers who were thought to be Super Bowl contenders when the season began.

In the end one attended the wedding and his team lost and the other didn’t and his team won. Pretty sure Belichick will take a win over attending a wedding any day.