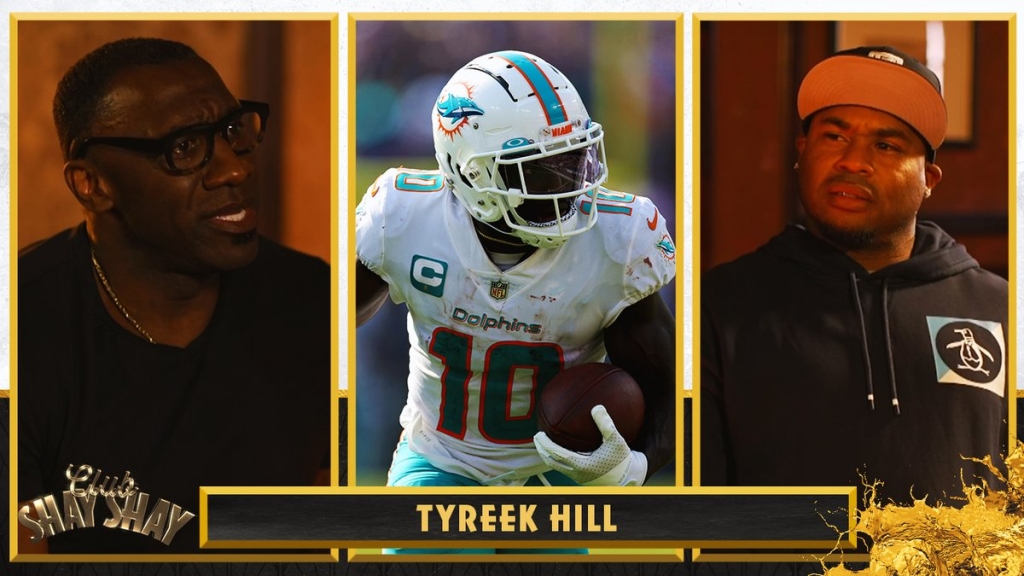 Shannon Sharpe And Steve Smith Speak On Tyreek Hill’s Hands As A Receiver, The Speedster Claps Back

Since his arrival to the NFL via the fifth-round of the 2016 NFL Draft, Miami Dolphins wide receiver Tyreek Hill has been lauded for his elite speed. Universally recognized as the fastest as the league’s fastest player, there has always been questions about Hill’s hands. While he makes a ton of dynamic plays and tough catches, he’s also been known to he have one of the highest drop rates amongst wide receivers.

During a recent episode of the “Club Shay Shay,” podcast, host Shannon Sharpe, a Pro Football Hall of Famer, and one of the greatest pass catching tight ends the league has ever seen, was joined by former NFL wideout Steve Smith, who cracked the ballot for the first time in 2022. During the segment the two talked about Hill and his play since joining the Dolphins this offseason, and his hands came into play.

When asked by Sharpe about Hill, Smith who doesn’t hole his tongue for anyone had this to say.

“Tyreek Hill is fantastic, he’s Cheetah. He runs faster than anyone I’ve known at wide receiver.”

“This is not a knock, but he’s a natural catcher of the ball.”

“He’s not a pure hands catcher.”

What Sharpe and Smith are saying is true, Hill doesn’t catch the ball with his hands most time. Instead opting to use body to help secure those deep downfield bombs.

Hill Claps Back As Only He Can Do:

The loquacious Hill has never been one to knock speak on things, and especially when it’s concerning him, wasn’t about to waste this opportunity to fire back. But he did it respectfully, taking to his Instagram to post pics of him making some great grabs with his hands. He captioned it with this …

“24 hours to respond… Respect both of you greats.”

Hill has definitely made some amazing grabs during his NFL career, when you’ve accrued 579 receptions for over 7,300 yards and 79 touchdowns, there’s plenty of highlights of Hill making the “hands catch.” But more often than not he doesn’t use his hands to make catches, and that’s a fact.

Thus far in 2022, Hill ranks first in receiving yards with 701 and he’s second to Los Angeles Rams and reigning Super Bowl MVP Cooper Kupp in receptions with 50. While he’s onto touched paydirt twice this season, a lot of that has to do with starting QB Tua Tagovailoa being out following a serious concussion.

With Tagovailoa expected back this week, Hill should a bump in his production again, as first-year head coach Mike McDaniel has made it a point to get Reek the ball as often as possible in South Beach.