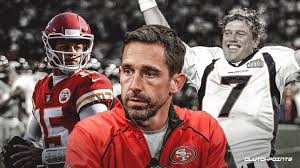 The Kansas City Chiefs and San Francisco 49ers are set to do battle in the bay on Sunda. It’ll be the franchise’s first matchup since their memorable Super Bowl matchup won by the Chiefs 31-20 with 21 unanswered points in the fourth quarter. In the game, Chiefs superstar Patrick Mahomes showed the wizardry that’s become synonymous with him weekly. His ability to extend plays with his arm and legs has become a staple of what the Chiefs do offensively. He does it so much it’s become something other coaches around the league  talk about prior to facing him.

This week it’s Niners head coach Kyle Shanahan who’s raving about the magician Mahomes has become when the play breaks down. As his team hopes to avenge that SB loss from a few seasons ago, Shanny had this to say about “Mr Ketchup On Errthang.”

“Just because you don’t ever see people play like that really. There’s not many people in the history of football as good as him. Reminds me of Hall of Fame QB John Elway a ton watching him. Just how he’s a top thrower on the planet and he can move. He’s not always doing it just with a flat-out 40, just running away from people, but the way he feels space and can create time and as he does it, his vision down the field with that arm talent is tough to deal with.”

Mahomes has made a living breaking the hearts of defenses with pocket manipulation, underrated elusiveness and rocket arm capable of making any throw needed.

Shanahan isn’t the only highly-respected football guy to say Mahomes reminds him of the former Stanford Cardinals and Denver Broncos legend. During a 2019 appearance on Peter King’s podcast, Manning was asked about his breakdown of quarterbacks on his show on ESPN Plus called “Detail.” With 2019, being the season after Mahomes first as a starter where he won MVP, tossing 50 touchdowns, Manning raved about his skillset to King.

“I mean, some of the throws that he’s making, I just don’t think anybody has seen the throws before. Whether it’s kind of the no-look throws. Sort of the ability to spring left and throw back to the right, he’s got a little John Elway to him. Elway was kinda famous for that. I mean, the Broncos actually started designing plays to sprint left and throw back right. Mahomes is still improvising, but what I like about him is that he’s taking coaching. Andy Reid is gonna coach the stew out of him, I like that for him and his future.”

Manning was onto something in 2019, as since Mahomes has also won a SB, SB MVP, appeared in two SBs. Also since he’s been the starter in KC they’ve hosted every AFC championship game at raucous Arrowhead Stadium, winning two and losing two in overtime.

After facing the Bills and their No.1 rated defense in the NFL in last week’s 24-20 home loss, Mahomes says he ready to face the gritty, and just as tough Niners who haven’t forgotten how they felt leaving the SB in 2020.

Defensive coordinator DeMeco Ryan’s is a rising head coaching candidate, and he had plenty of talent at his disposal.

Here’s what Mahomes said in preparation of the battle.

“We have a heck of a challenge this week against the 49ers. The 49ers are one of — if not the best — defense in the league. So as an offense, we have to know what we’ll have to take advantage of every day. We’ll have to watch the film great — so we can put ourselves  in the best position to have some success on the field.”